Truth be told, your relationship has long ceased being something to write home about.

Where butterflies once flitted, annoyance has muscled its way into the spot.

What you once brushed off as a vulnerably endearing quirk has morphed into an ostensibly insurmountable obstacle.

And now you’re worried contempt has also entered the room.

The spark extinguishes, and disgust seems to settle in.

So today, we’re examining how to spot contempt in a relationship and what to do about it before it’s too late.

What Is Contempt in Relationships?

Criticism: “Why are you so selfish!?”

Contempt: “I’ve been working all day, too. Why do you get to lay around after work when I have to do everything to prepare for dinner?”

Defensiveness: “This is your problem, not mine!”

Stonewalling: “When you’ve adjusted your behavior, then we can talk.”

Today, we’re focusing on contempt — which Gottman considers the most corrosive of the quartet.

Emotionally, having contempt for someone is a complex stew. It’s parts envy and anger, topped off with a dollop of self-righteousness and self-pity.

One thing that makes contempt so disconcerting is its knack for bringing out the worst in all parties involved.

Scorn in a marriage or established relationship can be a life-altering force. When left unchecked, it has the power to eviscerate personal relationships and can lead to various mental health hurdles, including:

There’s no way to sugarcoat the situation. By the time a relationship is drowning in thinly veiled disgust, it’s hurtling toward a breakup.

But couples committed to weathering all storms can safely navigate their unions to safer shores. It’ll be a rocky trip, requiring both parties to be unfailingly honest, patient, and vulnerable. 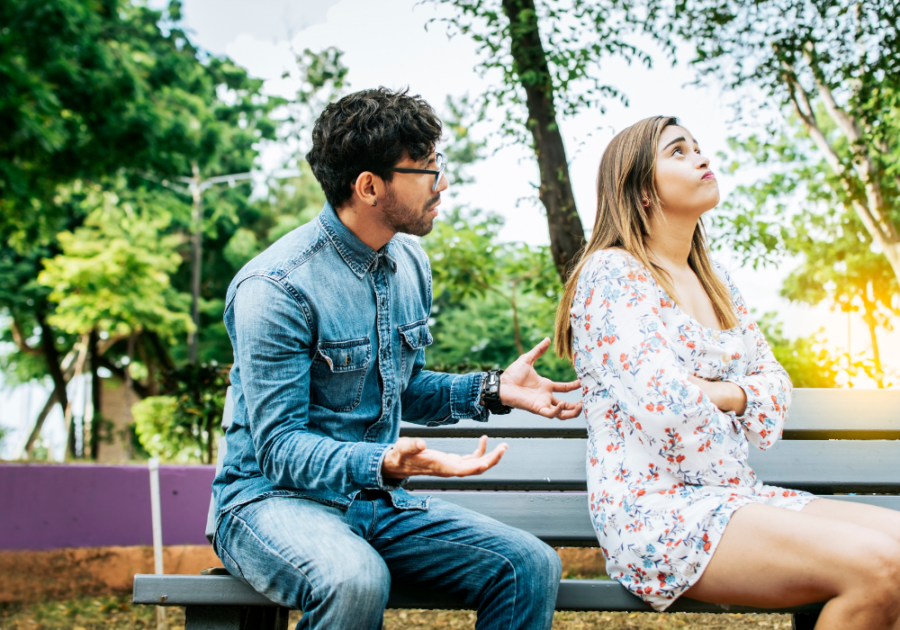 However, people who put in the work often enjoy stronger relationships as a result.

11 Heartbreaking Signs of Contempt in Relationships

What are some examples of contempt rearing its ugly head? Every relationship has its own set of issues.

What’s happening in your relationship may be lightyears away from your neighbors. However, there are a few common red flags regarding contempt.

1. You’re Passive-Aggressive With Each Other

There are few things in life as frustrating as passive-aggressive behavior.

It’s maddening because it wastes time and only produces negative energy, plus it’s belittling — as if the person lobbing the jabs doesn’t think you’re bright enough to catch their barbs.

If you find yourself exchanging passive-aggressive quips with your partner, it may be time to take a step back and figure out where the relationship slipped off track.

2. Fault-Finding Has Become a Hallmark of Your Communication

Be honest: What do you do when you’re annoyed by someone’s presence? You nitpick.

It’s common, and we’re all guilty of it at some point or another.

However, being the target can be soul-crushing.

Keep in mind that fault-finding isn’t the same thing as constructive criticism. The latter helps us grow and uncover personal blindspots. The former is just petty poking to try to make someone feel bad about themselves.

3. Your Body Language Is Off

Is your partner always positioning themselves as far away from you as possible? Or maybe you’re the one constantly running to the other room.

Whichever the case, if either of you finds it physically challenging to be around the other, problems have not only arrived, but they’ve settled in, and it’s probably time to get to a couples counselor ASAP.

Sure, we all need alone time — some more than others. But never being able to amicably be within a few feet of each other without getting annoyed or disgusted is a terrible sign.

4. You Compete More (In an Unhealthy Way)

Competition is contempt’s “wingman.” When one comes around, the other is almost always right there. Hanging on. Cajoling to get in on the action.

Some people are naturally competitive. And those types of people tend to partner with one another. But when the relationship is on tenuous ground, a healthy, friendly rivalry can metastasize into something much uglier and detrimental.

If your relationship dynamics mirror that of a Soviet-era Olympic training camp, disrespect has likely taken hold.

5. You’re Constantly Interrupting One Another

Is finishing a sentence increasingly difficult when in each other’s company — but not in a cute way? Is your partner constantly condescending to you by anticipating what you’re going to say? Do you give it right back? 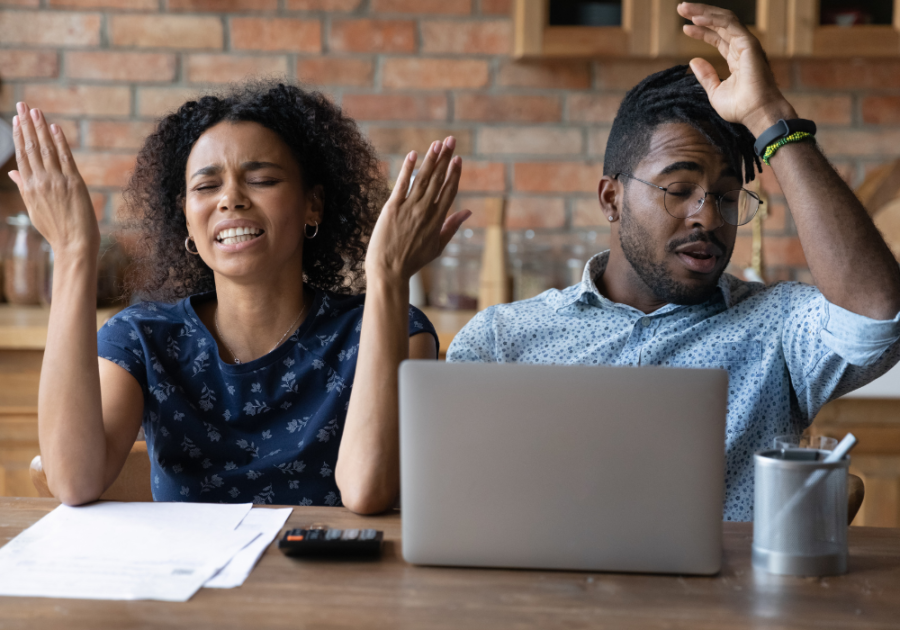 When couples finish each other’s sentences because they know each other well, it’s adorable. The act is leagues less endearing when it’s born of contempt, and the associated argument usually escalates quickly.

So if eye-rolling and mocking interruptions are currently flavoring your union, it’s probably time to tackle some unaddressed disdain.

6. There Are Listening Issues

Contrary to popular belief, listening isn’t a passive activity. Doing it well takes effort, requiring you to wrangle your focus and energy on someone else.

This can feel terrible when you’re filled to the brim with disgust for the person talking. If it’s your partner, things can grow even more heated.

109 Of The Best Appreciation Messages To Show Your Gratitude

27 Of The Most Glaring Traits Of A Female Narcissist

7. You Start Forgetting Things and Commitments

Has your partner started forgetting things, both little and big?

When relationships go through rough patches, and the involved parties keep colliding with one another, the brain starts making assumptions and may inadvertently shut out the other person, associating their requests with stress. Resultantly, it’s easy to forget things they say entirely.

This behavior snowballs because the more forgetful a party becomes, the more resentment grows.

8. One or Both of You Start Talking Negatively Behind the Other’s Back

Have you learned that your partner is talking trash behind your back? Sure, everyone needs to vent about their significant others from time to time. But if the stream of $#!+-talk fails to cease, something more problematic is probably at play.

Honesty and trust are cornerstones of healthy, functioning relationships. If your partnership has reached the point where you cannot talk things out, it’s probably on life-support and could benefit from some emergency first aid.

9. They Start Excessively Praising Others

A telltale sign that your partner has a crush on someone is the amount they talk about them.

Are they constantly praising someone with qualities dissimilar to yours? Are they doing it to get under your skin? Or worse, have they genuinely developed feelings for someone else and now see you as an impediment?

In these cases, it’s vital to get to the truth right away. Because if it’s not going to work out — if they’ve fallen for someone else — it’s better to know sooner rather than later. It will hurt, but the longer it drags on, the more pain will accumulate.

10. The Silent Treatment Is Deployed

You ask a question, and it goes right through them. They don’t flinch or answer. Or maybe you walk into the house, and they don’t acknowledge your presence.

Whatever the exact technique, it’s the silent treatment, and it’s a particularly frustrating, belittling, and dismissive form of emotional abuse.

To be clear, we’re not talking about those times when temperatures boil, and someone smartly removes themself from the situation until clearer, cooler heads prevail. That’s healthy. More of that.

Instead, we’re calling out the times when one partner immaturely refuses to acknowledge the other’s presence or answer their questions.

Look, if you’re mature enough to be in a serious relationship, you should be able to engage in difficult conversations with your significant other. Moreover, the silent treatment is a particularly harsh form of social punishment that can have long-lasting, harmful effects.

Contempt perniciously infects the human psyche. It amplifies the worst parts of our personalities and encourages our basest instincts.

So it’s not unusual for people consumed with disdain to lie and exaggerate to “get a leg up” or “stick it” to their adversary.

Like many things on this contempt list, this one falls squarely into the immature file. But again, contempt isn’t a rational, emotional expression; it makes us behave in ways that don’t serve our best selves.

How to Deal with Contempt in Your Relationship

Contempt isn’t a great sign, but it’s not insurmountable. If your relationship is experiencing a bit of turbulence, certain paths allow you to fly out of harm’s way. Let’s explore a handful. 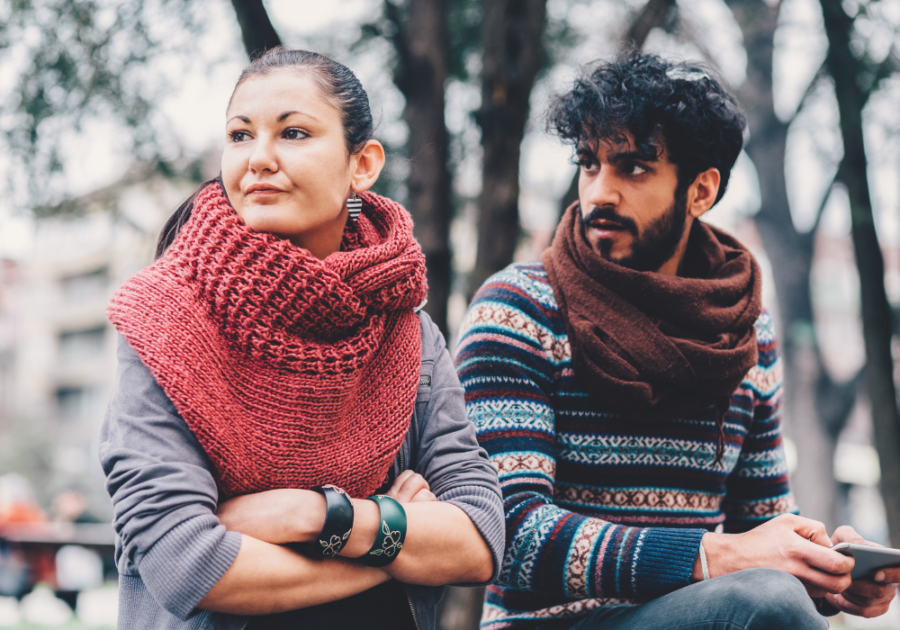 A refueling conversation can fill you and your partner with the information, compassion, and viewpoint shift that puts the contempt to rest.

We get it. Admitting fault isn’t easy.

Before pointing fingers at your partner — or anyone with whom you have interpersonal conflicts — turn the microscope inward. Are you behaving in a less-than-ideal way because of baggage you’re lugging around?

If so, explore why and consider possible solutions. Then, take action to change your behavior.

Scorn and disdain often creep in when a relationship is on its last legs. Its presence doesn’t mean a relationship is doomed to fail, and many couples overcome the problem. However, it also happens to be a sign that a given partnership has run its course.

So if you’ve reached a point where you cannot stand to be in the same room, you may want to start considering how splitting up would work.

If you’ve been in bicker mode for a while, and DIY efforts have proved fruitless, it may be time to enlist a professional therapist or coach.

A trained, objective eye helps tremendously. Professional counselors can quickly spot patterns and triggers and then suggest practical tools to steady the relationship and get it back on track.

Give Each Other Space

Relationships take work — especially if you live with someone. Learning to give each other space is an integral part of the process.

In some cases, contempt in a relationship is simply a cry for alone time. After all, everyone can get a bit tetchy when forced to be around others 24-7.

Space can mean myriad things, from formally separating for a period to planning alone hours at home. Try different things to see what works. Try not to get frustrated if the first attempt doesn’t work. Adjust and tweak until something sticks.

It may be time to consider parting ways if nothing seems to work.

Contempt is unpleasant for all parties involved. Nobody wants to feel it or be the cause of it. If your relationship is affected by uncomfortable levels of annoyance and disgust, address the issue head-on.

Letting the situation fester will only lead to more problems. But if you nip it in the bud, your partnership can flourish. 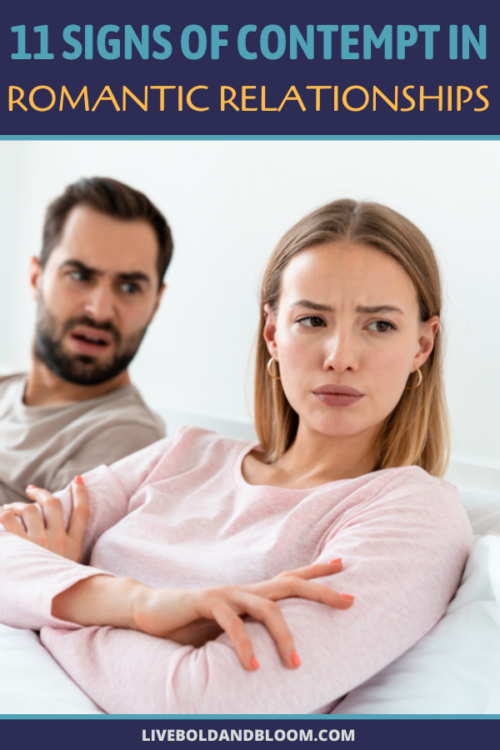