That great-looking guy just flirted with you.

He gave you that look you know all too well and said something just suggestive enough to let you know he’s interested in you.

But then you notice his left hand, and there’s a distinctive gold band on his finger.

The dude is married.

Why is this married guy coming on to you?

Maybe it’s just flirting “light,” or it could be over the top. Either way, it’s hard to know what’s up.

Is this just innocent fun or something more?

A married man flirting may or may not signify that a person wants to have sex.

And depending on overall circumstances, this indeterminate line is where men, specifically married men, get into trouble.

What Are The Signs of Flirting From a Married Man?

Some men are naturally outgoing and confident in who they are. The ability to socialize and relate is part of the job of being a man. But they are not attempting to flirt.

Other men are genuinely flirtations but never expect it to go anywhere because they are happily married.

To understand and recognize the difference between being nice and harmless or ill-intended flirtations, consider the overall situation.

And before you make a mistake or misinterpret someone’s intentions, think about these telltale signs of whether or not a married man is flirting with you.

His body language shows an interest in you.

He touches you when he sees you or when you talk.

He teases you a lot.

He is thoughtful towards you.

He emails or texts you outside of work.

He tells you he is flirting.

He makes suggestive or inappropriate comments (for a married man)

Men like to flirt. It’s fun and keeps interactions at the surface level. And in many cases, it is significantly easier than having a conversation with a stranger that doesn’t sound like an interrogation.

Most flirting is harmless, whether office flirting or chatting up the barista at the local coffee shop.

Sometimes a man will flirt because he feels unappreciated at home. He wants his actions and efforts as a father, protector, provider, and husband to be noticed.

If there is an issue within the marriage and he feels unappreciated, he may compensate by flirting. He may even flirt in front of his spouse to engender a jealous or possessive response – validating that he is still needed and wanted within the marriage environment.

Sometimes flirting is about sex. Men are sexual creatures, and when a married man flirts, the is a possibility that he is looking for a casual, extramarital encounter. If a man frequently flirts with coworkers, consider the intent. 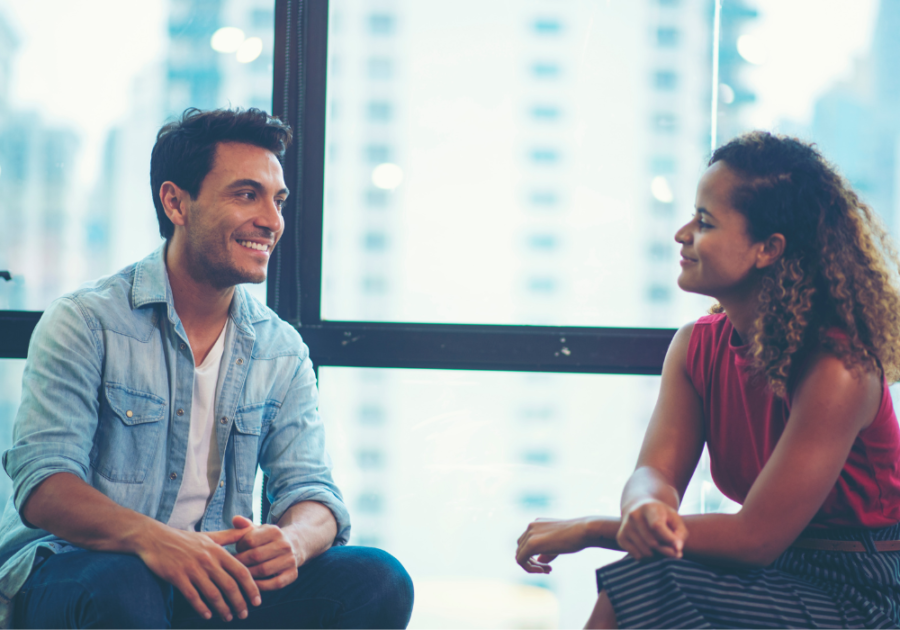 If there is an obvious sexual undertone, then there may be unmet needs within the marriage. The physical act of sex and the intimacy it engenders is a vital part of a relationship.

If there is a lack of sex at home, a man may pursue that intimacy elsewhere. And the office, or work situation, is a familiar environment.

If a married man is flirting with you, he may feel unloved at home. And he may be right. Or communication in the marriage has broken down. A man flirting at work when married is probably just looking for validation.

Many marriage therapists believe that relational dissatisfaction is why a married man flirts.

But when dealing with relationships, there are no absolutes, and the research is relatively contradictory – preventing a clear-cut cause and effect. The married man flirting can be a complicated animal.

Some men flirt in response to a slight, real or imagined, from their spouse. If he feels that she is flirting or unfaithful, he may pursue someone to “get back at his spouse.”

Trying to exact revenge is termed reactionary or situational flirting and often signals a deeper issue within a relationship.

Take care if you feel a married man is flirting with you in response to something his spouse has done to hurt him. This type of situation never ends well for anyone.

Both sexes need to feel desired. But there is some evidence that men need ongoing confirmation of their virility and masculinity.

But masculinity is an integral part of the male identity that goes beyond genitalia and clothing choices. It includes basic concepts associated with men, such as the need to perform, protect those he cares about, and defend the weak at all costs.

For men, flirting with coworkers or in social situations can be a simple and relatively harmless way to reinforce their masculinity.

One of the reasons married men flirt is because it is expected of them. In many situations, flirting is a way to communicate one’s place in a hierarchy.

Unfortunately, he can take it too far if the environment encourages permissive or manipulative behavior.

Men and women can use flirting to gain favor or manipulate a situation. Expectations of flirting are, at best, an uncomfortable situation. In some cases, it may contribute to an overall toxic environment or workplace.

7. It is learned behavior.

Flirting is a skill. A man that grows up in a household watching his dad or mom flirt with no ill intentions or overall damage to his parent’s marriage will learn and eventually replicate those skills.

He will understand that flirting is a positive thing and a way to show someone you care. Flirting between two people who care about each other is a beautiful thing, not negative at all.

He will carry those techniques into his social interactions and relationships, but his intent is not to harm or disrespect.

Some men are just outgoing. They learn and believe that flirting can be positive and flirt with everyone. This type of personality is usually harmless or not taken seriously.

And most married men with a flirtatious nature just want to make someone smile or have fun.

If you are married to a flirt, consider his intent. Has he been faithful, a good father, and a dedicated husband?

If he has always been a flirt, he will likely never change. But that doesn’t mean he is trying to have an affair out of the blue. He is just himself.

A married man flirting may be looking for an ego boost. Everyone enjoys a compliment or being found attractive this is considered inspirational flirting – suggestive interactions that provide inspiration or validation.

This flirting type doesn’t necessarily mean he wants to have sex. While several studies link flirting and sex, just as many research studies focus on the nonsexual aspect of flirting.

Most married men who flirt want to feel attractive. In the end, they want to know they are still marketable.

13 Marriage-Saving Ways To Deal With A Disrespectful Husband

What Are The Pitfalls of Flirting with a Married Man at Work?

Gentle teasing with someone outside your marriage is harmless if proper boundaries remain intact.

Yes, flirting can be innocent fun. But there are some distinct dangers of flirting with a married man at work.

Flirting when you are married can hurt your career. Many companies have morality clauses that force termination or resignation if an affair or even inappropriate behavior is discovered.

If you work in a limited environment, flirting with a married man may earn you, not him, a reputation or even prevent your future hiring.

If he flirts back and is in a power position over you, he may be violating a sexual harassment policy and could lose his job if he’s found out.

2. It involves emotional or cyber cheating.

Also referred to as emotional cheating, this is a real danger for you and the married man involved. If you are spending any time together, you may develop an emotional connection.

These feelings can easily develop into a full-blown affair.

It is also dangerous to you as an unmarried person because it diverts your attention from pursuing positive relationships.

In online environments, cyber flirtation can cause hurtful confusion. Because you aren’t face to face with this man, it’s hard to know when flirting has crossed the line.

But it can be devastating when this type of relationship is ended if you assume it’s more than it is for him.

3. It causes infidelity and disloyalty.

Extramarital affairs are the worst-case scenario where harmless flirty banter evolves into a full physical and emotional relationship.

A University of Florida study states that over 95% of mild flirtations evolved into in-person, extramarital affairs.

Is Flirting While Married Cheating?

A common definition of flirting is any behavior that attracts or tries to attract someone for amusement rather than with serious intentions.

Again, intent is a major factor when determining the appropriateness of flirting while married.

Another major factor is the definition of flirting itself. Our basic definition describes flirting as mostly harmless.

But many researchers include a significant sexual component in their definition of flirting. When it comes to relationships, there is no one-size-fits-all definition.

Each person or couple has their own definition of flirting with unique boundaries appropriate to their marriage or relationship.

Numerous factors should be considered when considering the question, is flirting while married cheating?

Researchers agree that flirting can be innocent. But what is inappropriate flirting when married? There are a few distinct situations in which flirting with a married man crosses the line into cheating.

If he is rationalizing the relationship.

Deprioritizing his spouse or family.

Flirting is driven by emotions and instinct rather than by logical thought. Even animals flirt. Yes, flirting can lead to serious attraction or even become sexual.

But arguably, if sex or strong attraction is involved, the situation has already moved well past flirting.

Flirting does not have serious intentions and is more about complex social interactions and communications. So the next time a married man smiles and pays attention to you, don’t assume the worst.

Keep things above board and enjoy a little innocent attention. 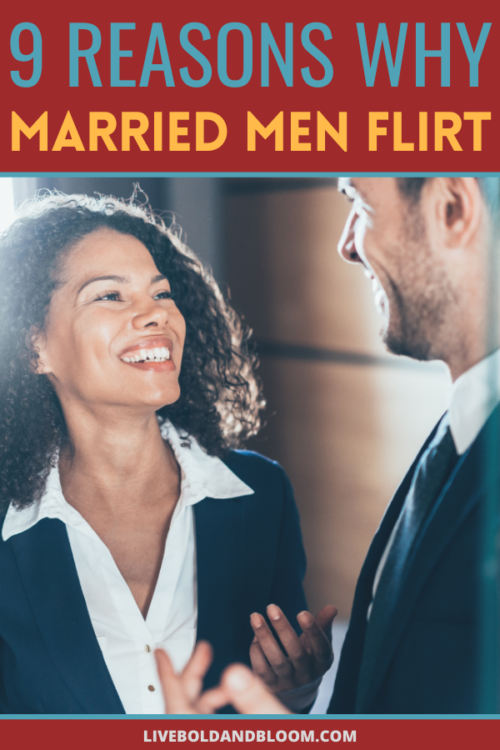 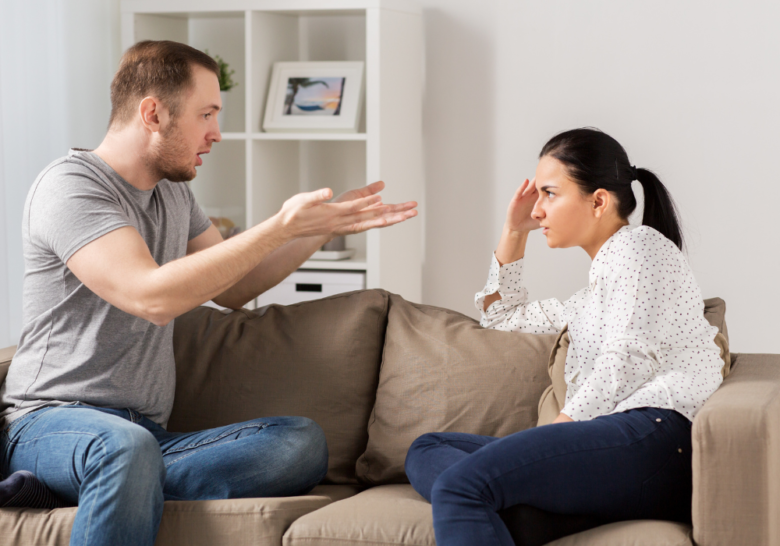 21 Stages of a Narcissistic Relationship with an Empath