Juan Kabayan | Filipino Marketing Agency ESTRAT 360 wins Int’l Company of the Year Award 2022 | ESTRAT 360, an integrated communications and creative marketing agency from the Philippines, was named “Company of the Year” in the Advertising, Marketing, and Public Relations (Small category) of the 19th Annual International Business Awards® (IBA). The Gala and Awarding Ceremonies was held at the InterContinental London Park Lane in London, England, last October 15. 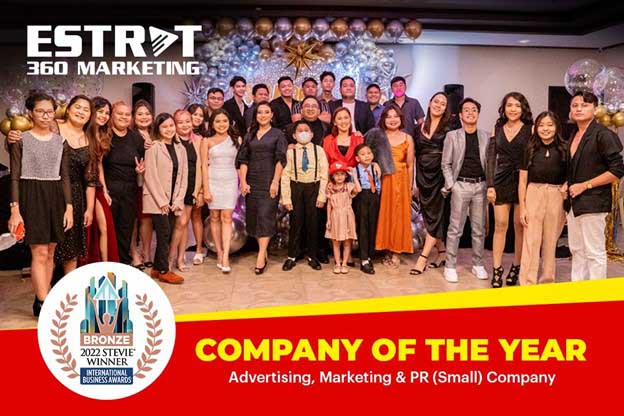 IBA is one of the global and most prestigious awards programs that a business can take pride in. It displays an inclusive platform for organizations of all sizes and sorts—public and private, for-profit and nonprofit, large and small—to acknowledge their outstanding performances.

Over 3,700 entries from various organizations in more than 67 countries have been accepted and reviewed by the panel consisting of 300 executives from the marketing landscape around the world to determine the rightful Stevie Award winners, and ESTRAT 360’s Bronze Stevie Award affirms the company’s consistent and continuous growth in in both local and global scene over the years.

ESTRAT 360’s diverse client portfolio impressed one of the juries: “ESTRAT 360 Marketing Company’s precision in their core competencies and focus areas offers businesses and organizations unique services for accelerated scaling and transformative expansion for competitive advantages and global market entry sustainability. Another judge pin-points ESTRAT 360’s strength as a dynamic small company with the presence of a “Global Giant.”

The judging panel also praised ESTRAT’s consistent fast growth, from a one-man operation in 2014 to over 40 full-time creative partners in 2022, which has helped its clients succeed in achieving marketing targets. 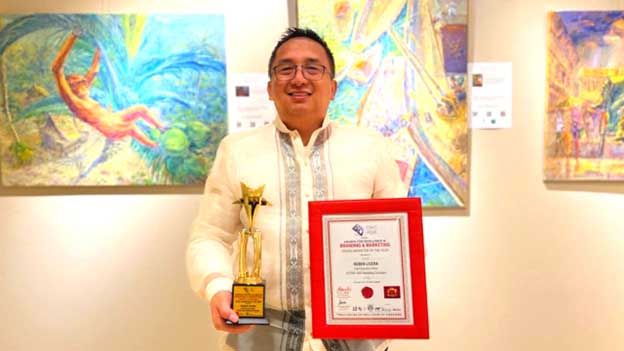 2022 is a great year for the homegrown creative agency. Mid this year, ESTRAT 360’s CEO has also been awarded as the “Digital Marketer of the Year” for the impressive body of works and campaigns it has presented to the judges of the 13th CMO Asia Branding and Excellence Awards held in Singapore.

13th CMO Asia Branding and Excellence Awards, a premier global network body that honors exemplary marketing professionals, agencies, and consultants who have contributed significantly to the marketing industry, held earlier this year at Pan Pacific Singapore in commemoration of its regional leadership and excellence.

On the same award-giving body, ESTRAT 360 Marketing Company was hailed as this years  “Marketing Agency of the Year”

Chief Executive Officer (CEO) Ruben Licera shares, “These awards are testaments to our groups’ unwavering passion and commitment to providing impactful and world-class creative and strategic marketing campaigns that can help our clients grow.”

ESTRAT 360 Marketing Company is an international award-winning full-service 100% Filipino-owned creative and strategic communications and creative marketing and advertising agency from Cebu, Philippines. A member of the LICERA Ventures Group, ESTRAT 360 has served more than 360+ clients and launched more than 35,000 campaigns for local and international clients including Subway, Ginebra San Miguel, PASAR, Cemex and Aboitiz. Its strength is in its customized growth marketing centric services for its customers to #growfurther. For more information, visit www.estrat360.com.