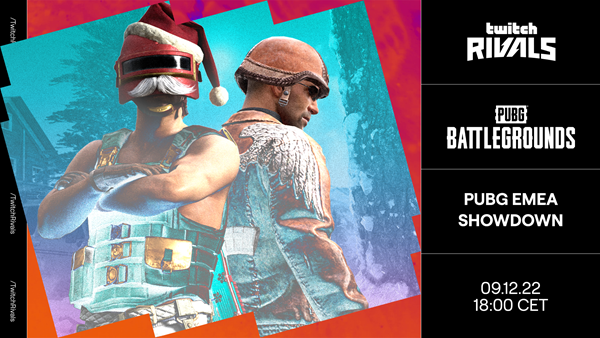 KRAFTON, the developer of the battle royale game PUBG: BATTLEGROUNDS, has partnered with streaming platform Twitch for the latest edition of the Twitch Rivals tournament.

The Twitch Rivals: PUBG EMEA Showdown will feature teams of Twitch streamers from the EMEA (Europe, Middle East, and Africa) region headed by known personalities. The teams will fight for a $100,000 (~£81,000) prize pool on December 9th.

Twitch Rivals is a joint name for a series of tournaments that take place regularly on the platform. The general format consists of streamers taking part in esports competitions, but there are numerous twists on the formula. This time around, eight known streamers will captain teams and will get the chance to pick players to play with and fight for the top prize during the tournament. There will be a total of 64 players taking part in the event.

KRAFTON and Twitch have also announced rewards for viewers of the event, ranging from in-game sprays and shirts to jackets for their characters in PUBG. There will be a total of four matches taking place, three matches with eight-person squads and a 32 vs 32 platoon match.

Robin Allemand, Head of Twitch Rivals at Twitch, commented: “Twitch Rivals competitors compete for the chance to enter Twitch history, earn bragging rights, prizes, and, most of all, have fun.

“Twitch Rivals for PUBG: BATTLEGROUNDS will see some of Twitch’s most renowned streamers fragging out and taking names, hosted by fan-favorite casters who will break the action down for you every step of the way. “

Since its inception in 2018, Twitch Rivals has grown from a streamer showcase to a separate brand with its own partners and sponsors. Twitch has partnered with cryptocurrency exchange Crypto.com in 2021 to further improve the event series, and the streaming platform has also partnered with State Farm, Pizza Hut and Logitech G, among others.